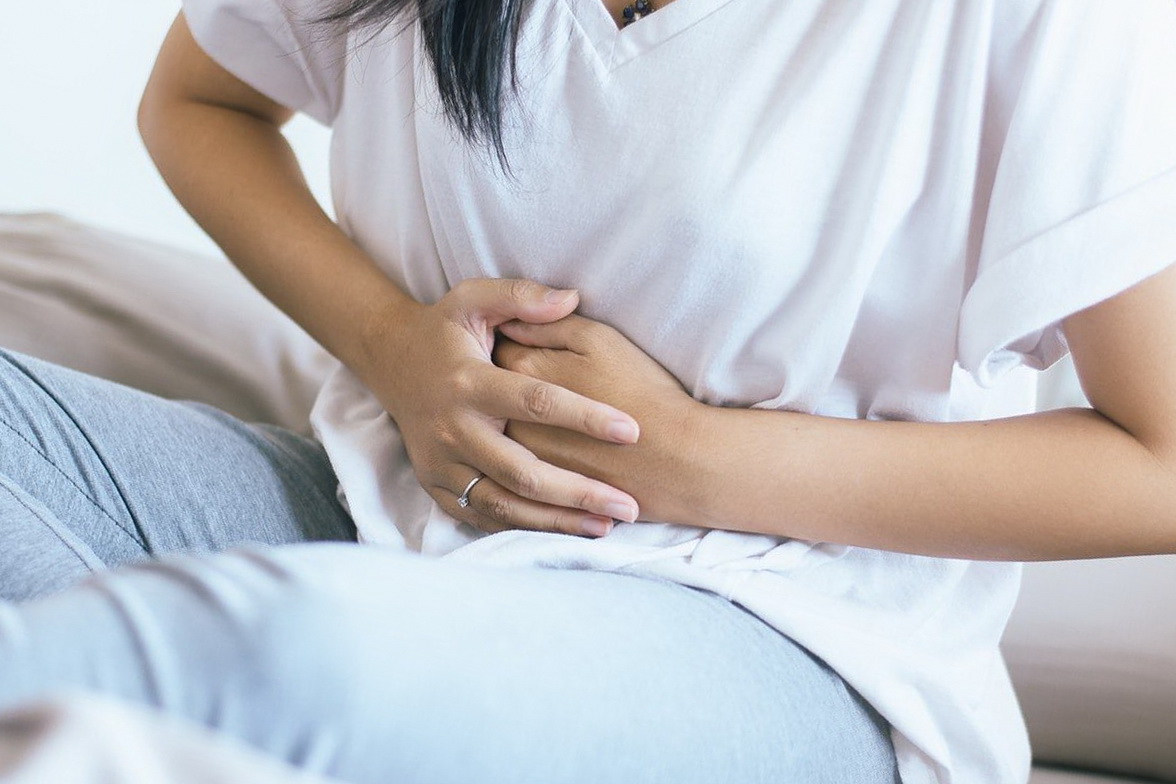 Menstrual pain is very, very common, and sometimes it’s really severe. As many as 1 in 10 women have them bad enough at least one day every month, where they’re not going to school or going to work.

Now the treatments aren’t frankly very good: Ibuprofen, sometimes the other pills. Well, they leave a lot to be desired.

But, there’s a rule for food that’s very surprising we’d like to share this with you. For many women, it has been absolutely life-changing.

However, before that, let us describe what menstrual cramps really are and where does the pain comes from. If you look at the uterus, off to the side, you’ll see the ovaries, which are connected by the fallopian tubes.

Well, every month, it’s normal for that uterine lining to thicken up because the uterus is getting ready for pregnancy. But sometimes that uterine lining or endometrium can thicken up too much, and when it does, it produces maladjusted chemicals called prostaglandins that cause cramps, and they make you hurt.

Those prostaglandins will even get in your bloodstream and make you feel really out of sorts. So, what can we do? Well, the key to this seems to be a hormone called estrogen. There’s actually a whole group of estrogens, and they’re in your bloodstream.

At the beginning of the month, there’s very little estrogen in a woman’s bloodstream, but after about two weeks, it rises to a peak, and then it falls. That’s when the ovary is releasing an egg. Then, over the next week, the amount of estrogen rises again, and that’s because the uterus is the most optimistic organ in the body.

Every month it is convinced – this is it, we’re going to get pregnant for sure. So that rising amount of estrogen thickens up the inner layer of the uterus. After a week, the disappointed uterus discovers we are not pregnant and lets that whole thicken lining go away in menstrual flow.

The key is if there’s extra estrogen in a woman’s blood, that thickening of the lining goes on too much, the lining gets too thick, and that causes heavier flow, more pain, more cramps, more menstrual symptoms in general. Surprisingly enough, all of this can be changed by food.

Researchers a long time ago discovered that if you change your diet, you can change how much estrogen is in your blood. And if you can do that, you could change the cramps.

No animal products mean avoiding the meats and the dairy products and the eggs, and when we say minimize oils, we mean avoiding fried things, oily salads, and even greasy foods like avocados or peanut butter.

We put this diet to the test working with Georgetown University’s Department of Obstetrics and Gynecology and brought in a large group of women. They all had moderate to severe menstrual pain, and half of them were asked to start the diet that we described – a vegan diet with very low in oil.

We published the findings in a journal called Obstetrics and gynecology and what we found is that the severity of the pain diminished, and not only that, so did PMS symptoms like bloating or water retention or moodiness.

Again what we were testing was no animal products and minimizing oils. Why would that work? Well, the first thing is fatty foods increase estrogens. When you eat fatty things, whether it’s animal fat like a pork chop or a chicken breast or even vegetable oils like something fried, onion rings, for example – those oils and fats tend to increase the number of estrogens.

There’s more – when you consume plant foods (in fact, when everything you’re eating is from a plant), you get a magic ingredient, and that is fiber.

Fiber is big stuff! Fiber means plant roughage. It’s in fruits, vegetables, beans, it’s in whole grains, and here’s why it matters. Your body actually has a way of getting rid of excess estrogen. Those estrogens that are thickening up the lining of the uterus and making you miserable. Your body has a way of removing the excess and leaving you with the amount that you need.

How do you do that? Well, it’s the liver. The liver removes excess estrogens from the bloodstream and sends them through the bile duct into your intestinal tract, and their fiber carries them away. You’re literally flushing away excess estrogen.

However, what if your lunch was chicken breast, salmon, and yogurt. They are not from plants; they’re from animals, so they don’t have any fiber at all. If there’s not enough fiber in your intestinal tract, then when the liver sends the estrogens down into the intestine. There’s no fiber to hold on to them, they end up getting reabsorbed back into the bloodstream, and they keep circulating in your body, making him miserable.

One more thing you should expel from your diet is cheese. We know people love cheese, but it actually contains estrogens. Cheese comes from milk. Milk comes from a cow, and cows are impregnated on dairy farms every single year.

It’s kind of a creepy process, but at the end of it, the cows are pregnant, and a pregnant cow has about a nine-month gestation. During that period of time, they’re making estrogens that get into their plasma and then into their milk.

So, if you take a pail of milk, you can measure the estrogens in it, then you turn the milk into cheese, and the estrogens are concentrated. That adds to the estrogen in your body, thickening up the lining of the uterus, causing endometriosis to progress, causing all kinds of hormone haywire that we don’t want.

What are we going to do? We’re going to recognize there some foods we may love that just don’t love us back. It’s time to break out of a bad relationship.

Just try this for the next two months: no animal products and keep oils really low, so that means learning to cook without adding oil and for now, skip the guacamole, the avocados, and the peanut butter.

Chances are your pain will improve might even go away. You’ll probably lose a few pounds or even more than a few. Your cholesterol will come down, you’ll feel better, and you might notice your skin and hair are better.