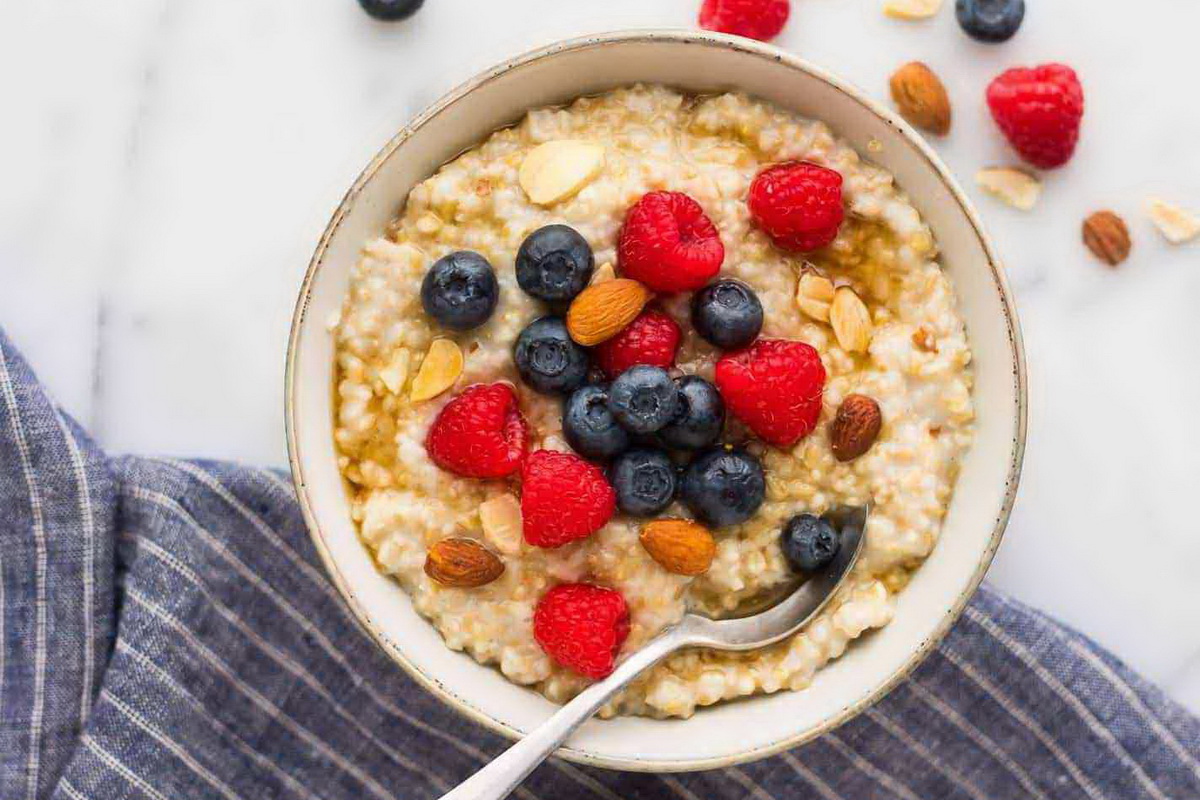 This is an unprecedented time, and when you go into grocery stores, people are running around filling their carts, hoarding all kinds of things. And let us tell you something – you’re hoarding all wrong! You’re getting unhealthy foods! We’ll show you some foods that you ought to be stocking up on.

The first one is a no-brainer, and that’s old-fashioned oatmeal. Why? It’s healthy, brings your cholesterol down, lasts forever, and it’s filling. But you are you’re thinking – wait a minute, maybe for some people a little oatmeal with some cinnamon and raisins and blueberries is good, but every time I make it I follow the instructions, and it turns out like rocks.

Well, what’s the answer? Let us give you a quick one-minute cooking tip on how to prepare the perfect oatmeal that you’d actually want to eat.

First of all, if you want your oatmeal to be crunchy, do what it says on the package – boil the water, then pour the oatmeal in that, seals the oatmeal grains, and it keeps them kind of crispy.

But let’s say you like a nice bowl of creamy oatmeal. What you should do instead is put the water and the oats in the pan first, not hot. Then turn it on, and if oats are already in the water when it heats up, it’ll turn out nice and creamy. Very simple. Of course, you can top it with whatever you want: strawberries, blueberries, or almond slivers.

Next thing: let’s say every morning you have your cold cereal with cow’s milk. Ditch the cow’s milk. Instead, pick up some soy milk, almond milk, hemp milk, or oat milk. There are a million of them nowadays, and in their cartons, they last just about forever, they taste great, and they’re healthy for you.

Number three is rice. Rice lasts a long time, extremely nourishing, and there’s white rice and brown rice, but we know what you’re thinking – wait a minute, I made brown rice once, and it came out just like wet newspapers. Here’s why.

Brown rice has the fiber still on it, and that fiber coating absorbs some water and can make it kind of mushy. So here is what we are going to do – spend a few hundred dollars and get a really expensive rice cooker… maybe =) We got another tip on how to make perfect brown rice.

Take about a cup of rice and rinse it put it underneath your faucet. Get it all wet and then drain that extra water off, and now you’re just left with some damp rice in a pan. Put it on the stove, turn up the heat to high and stir it dry. This will take maybe two minutes, not longer than that. We’re not making popcorn. We’re just toasting it a little bit until it’s all nice and dry.

At that point, we’re going to fill it with extra water. You know, when you cook rice, the package instructions say: one part rice, two parts water – don’t do that.

Even at the risk that your roommate is going to rush in and say don’t do it this way, here’s what you should be doing: three parts water or more for one part of rice. What you’re doing is you’re cooking it like pasta, and then when it’s done, you just drain that extra water off. How long? About forty minutes.

Rinse it off, stir it dry, toast it a little bit and then cook it for 40 minutes with extra water, drain off the extra water – best rice you ever had.

Next – beans. If you’ve been a person who’s always having canned beans, that’s great! They last a really long time, but how about cooking them from scratch. We know what you’re thinking; we thought this too – it takes forever! Who has the time?

Well, we realize that if you’re soaking the beans, they soak themselves. You put them in water, and you can do something else, and while you’re cooking, they cook too, they don’t require close supervision.

Let’s show how to cook beans from scratch. Step 1 – take about a cup of beans and rinse it off. The instructions always say that because they say there might be a few stones or sticks in there. We have never found one, but nonetheless, we rinse them anyway, and you should too.

Then we soak them overnight, put it in a big pot, then cover the beans with water and add a little bit of salt, maybe about a tablespoon of salt. Why? Because otherwise, without that salt, sometimes the beans can have that outer coating that can be a little bit leathery the next day. Somehow the salt seems to stop that. The theory is it keeps calcium from getting in from your water into the beans. Add a little salt, and you’ll be glad you did.

Then tomorrow morning, what you do is drain off that water (just the soaking water) and rinse it again. Now, fill it with fresh water and boil it for just about an hour, and then you’ve got great beans.

Now, what do we do with them? Get an immersion blender and purées the beans into this beautiful creamy texture. Take those little tubs with the red lids (you know, the ones that they have portion it out), and you can freeze them put one portion in one another portion, and they last for weeks and weeks.

Now when you’re ready to have them for lunch, you just take your little container, run it under hot water under your faucet, and out pops this little brick of frozen beans, put it in a bowl, you can microwave it for a couple of minutes, and you’ve got fabulous beans.

By the way, while you’re thinking about beans, don’t stick with just black beans or pinto beans. You can, but why not explore – there are a million kinds of beans. What you’ll discover is the store has all kinds of beans and other legumes that you want to try.

Did we forget the obvious one? Vegetables. They are the healthiest things there are, and you can get them frozen. They’re not expensive, those little bricks of frozen vegetables they cost almost pennies.

The next one is tofu. Tofu is the one food people are really phobic of until they taste it, made the right way, and then they just can’t get enough of it. It’s delicious, it’s high in protein, but no cholesterol, no fat, and when you buy tofu, look at the date on it – it lasts a really long time in the refrigerator. There are lots of ways of making it.

Some people just put it in a non-stick pan, scramble it up with a little turmeric to make it yellow, some soy sauce, maybe some miso, other spices, herbs, sometimes vegetables – delicious.

Right next to the tofu in the store is something called tempeh. That might be a new word for you, but have a look at it. It’s soybeans as well, but it’s fermented, and it can be sliced up. It tastes very much like bacon when it’s sauteed – very savory dish.

How about a veggie burger? They’ve been around forever, and there are more brands than ever before. You’ll see them at the store, you can keep them in your freezer, and they last a really long time.

By the way, it’s not baker’s yeast, and it’s not brewers these – those are bitter nutritional yeast is bright yellow, cheesy flavor, and delicious.

So, this is an unprecedented time, we’re home, and we could be snacking on all kinds of unhealthy things, and when this current situation is over, we’re going to have more regrets than when we started.

Let’s make this a time to stock up on healthy foods and that we get as healthy as possible.